The hearing for our application to the Environmental Protection Authority (EPA) occurred in Pukekohe on March 17th.

TomatoesNZ’s presentation explained why having access to an effective Biocontrol agent for whitefly is of critical importance to the tomato industry. We summarized the research that had gone in to determining that Macrolophus is the only real option. Dr. David Logan from Plant & Food research described his climate modelling work, which predicted that most of NZ is unsuitable for Macrolophus establishment outside the greenhouse.

Presentations from supporting submitters included growers talking about how the challenge of trying to manage whitefly impacts on their businesses and on them personally. Other supporters described how Macrolophus has been distributed in NZ before but has not been seen since, and how other whitefly management options do not provide the control needed.

Several opposing submitters presented, including the Department of Conservation, Ngai Tahu, an entomologist and an ecologist, Northland Regional Council and the New Zealand Biosecurity Institute. Their concerns were mainly that Macrolophus will establish widely outside the greenhouse, and that it can feed on many types of insects and sometimes plants, and they thought growers should use other control options.

The EPA staff described how they came to the recommendation in their staff advice report. The report recommended that the application be declined, even though Macrolophus meets the Minimum Standards of the Hazardous Substances and New Organisms (HSNO) Act and that they do not consider that the risks pose significant harm to people, the environment or the economy, they said that the economic benefits case we presented in our application was not strong enough.

The EPA decision-making panel is now considering whether to approve or decline our application, and we expect to hear the outcome in early May. 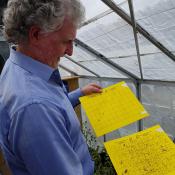 “Hunt” for Macrolophus project proposal approved May 2017 At their second meeting for the year in Auckland on April 26th, the TomatoesNZ...

“Hunt” for Macrolophus project proposal approved At their second meeting for the year in Auckland on April 26th, the TomatoesNZ board...

*Whitefly pest control issues* Whitefly, which has long been the number one pest issue for greenhouse tomato growers, proved to be...

When the Environmental Protection Authority (EPA) reassessed the use of organophosphates and carbamates (OPCs) in 2013, they also reassessed the...

Teachers take a lesson Attracting young people into horticulture is not easy. As a way to showcase our industry to those...

In 2008-09 the Fresh Tomato Product Group of Horticulture New Zealand conducted a MAF Sustainable Farming Fund Project for the...