This “new to New Zealand” species of thrips, Echinothrips americanus commonly known as Poinsettia Thrips, was discovered in an Auckland greenhouse in August. So far no further finds have been reported.

We quickly identified, based on information from overseas, that this thrips species is unlikely to create an added pest burden for tomato crops. It is limited to within greenhouses, and tends to prefer woodier species, such as houseplants. It may establish in Capsicum which have a slightly woodier stem than tomatoes. It is widely present overseas, where it causes less of a problem than Western Flower Thrips, a species we also have in New Zealand.

That said, we are hopeful that the species may not have spread beyond the initial location it was found. Intensive control measures have been undertaken at that site, and there have been no further sightings. We are working with MPI on a surveillance plan to give more confidence as to whether it has spread or not.

As Government Industry Agreement on Biosecurity (GIA) partners, TomatoesNZ and Vegetables New Zealand received early notification of the find from the Ministry for Primary Industries (MPI) Biosecurity Response team.  This allowed us to quickly gather some information about what impact the pest would likely have on our sectors if it were to become widespread, notify our members early and work with MPI on deciding the best course of action. This is different from new pest finds that occurred before GIA, when MPI was under no obligation to notify or consult with industry about what steps would be taken. 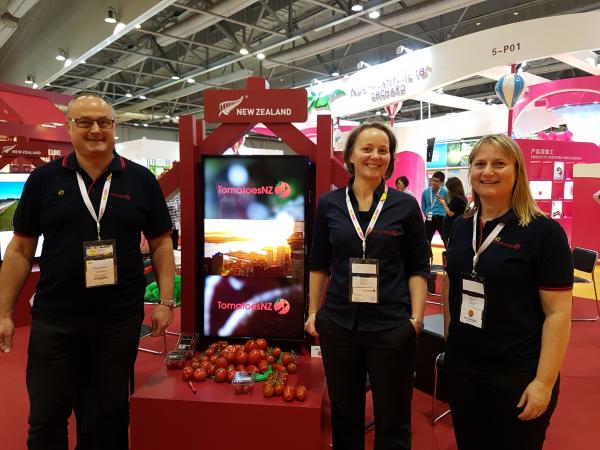 This was Tomatoes NZ’s third time exhibiting with Simon Watson and Nicole Metzger from NZ Hothouse again “manning” the stand. It was my time first time attending. The NZ pavilion had a real buzz and seemed to be one of the busiest displays. The show gets bigger every year, and occupied twice the floorspace of last year’s expo, with 22 countries represented.

The purpose of TomatoesNZ’s presence is to raise awareness of New Zealand tomatoes, develop new export contacts among Asian and Pacific Rim countries, and to grow exports to the region.

NZ Hothouse’s cherry tomato samples were a real visitor drawcard, and people loved their flavour. We handed out many of our brochures which describe NZ greenhouse tomato growing techniques and lists all three exporter’s contact details. Visitors were interested to learn that the tomatoes were grown indoors and available all year (with a peak from Nov – Feb), and that we already export to a wide range of Pacific Rim and Asian countries. Local NZTE staff introduced Simon and Nicole to importers from two countries that they currently do not ship to, and they are following up on those strong new-customer leads.

A new addition this year was a short video clip showcasing New Zealand landscapes and lifestyle (courtesy of NZTE), the NZ Hothouse glasshouse, and tomato growing. This proved useful when we were asked about our tomato production, and seemed to help draw visitor’s attention. The video was put together by NZ Hothouse with the assistance of New Zealand Trade and Enterprise (NZTE), who provided landscape and lifestyle clips.

Some of the new biocontrol agent for the Tomato Potato Psyllid have been released in Canterbury and Hawkes Bay. See Tamarixia page for a report.

The TomatoesNZ board will meet in Wellington on the 26th October. Topics for discussion include:

-        “Hunt for Macrolophus” project: Ag Research will present a survey plan and the board will decide whether to proceed.