In March, TomatoesNZ issued a press release supporting calls by Horticulture NZ and Consumer NZ for all political parties to support the Green Party’s private member bill, the Consumer’s Right to Know (Country of Origin of Food) Bill, which is currently before parliament.

The results of a recent survey carried out by Horticulture NZ and Consumer NZ showed that 71 percent of New Zealanders want mandatory country of origin labelling. Seventy percent want to buy NZ grown fruit and vegetables, while 60 percent look for the country of origin when purchasing fresh produce.

This was a similar result to a study of 1,000 people in 2015, commissioned by Tomatoes New Zealand, which found that 85 percent wanted clear labelling to help them identify between New Zealand tomatoes and irradiated Australian tomato imports.

TomatoesNZ Chair Alasdair MacLeod says that “Country of Origin Labelling allows consumers to make an informed choice about what food they purchase. It’s time we followed the lead of other developed economies like Australia, the USA, Singapore and the Netherlands, where such labelling is compulsory”

“We believe that mandatory labelling should include the country of origin. All consumers have the right to make an informed choice about what fruit and vegetables they buy.

“We look forward to seeing how the Green Party’s private members bill progresses through Parliament. We hope that all parties back it to select committee stage so that consumers’ voices are heard.”

A well-attended pest control workshop was held at Plant & Food in Pukekohe on the 21st March.

Forty tomato, vegetable and potato growers, consultants and suppliers came to learn how to carry out an on-farm bioassay technique to test how well their insecticides are working; and to hear a presentation about the new TPP biocontrol agent Tamarixia Trioaze. Participants have been asked to give feedback on whether they use the bioassay over the next couple of months, and the results they find.

The bioassay is being taught as part of a project funded and led by TomatoesNZ, and supported with funding from Vegetables NZ and AGMARDT.

The group then heard about the Sustainable Farming Fund research project underway to release and monitor Tamarixia into New Zealand, and growers got to view some Tamarixia specimens under a microscope. 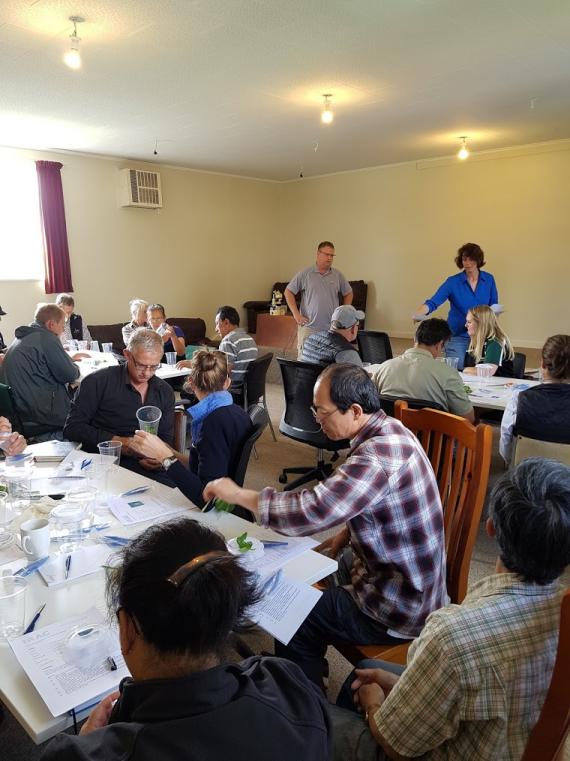 A batch of the new biocontrol agent for Tomato/Potato Psyllid (TPP), Tamarixia Trioaze was imported by Plant in February.

Unfortunately, during routine pre-release testing it was found to have a fungal contaminant, and could not be released. The project team is now considering next steps, and how it might get a new, clean batch of Tamarixia into New Zealand in time for release this season. We will keep you posted.

The TomatoesNZ Board met in Wellington on the 23rd February. Agenda items included:

The next Board meeting will be held on April 26th in Auckland.

At their February board meeting, the Tomatoes NZ board agreed to again provide support for fresh tomato growers to attend the conference.

All fresh tomato growers are invited to attend the TomatoesNZ Annual General Meeting, to be held at 1:00pm, Wednesday 12th July, at ASB Baypark Stadium, Tauranga.

Lunch will be available before the AGM from 12:00pm.

Following the AGM there will be a range of concurrent conference presentations. These will be joint sessions with Vegetables New Zealand and the New Zealand Asparagus Council. There will be topics of interest to both indoor and outdoor growers.

There will be a Vegetable Grower’s Dinner on the evening of Wednesday 12th. This will be a chance to relax and catch up with fellow vegetable growers at a smaller event than the main conference awards dinner on Thursday night.

Any levy paying fresh tomato grower will be able to claim back the conference registration cost and up to $500 each towards conference travel and accommodation.  Registrations are opening soon at http://www.confer.co.nz/hortnz2017/ , and a claim form for TomatoesNZ members will be downloadable from http://www.tomatoesnz.co.nz/about/conference/ .