Early detection of an unwanted virus – the Tomato brown rugose fruit virus (ToBRFV) – in a small tomato seed lot has allowed quick action to be taken to contain and prevent it taking hold in New Zealand. All the seeds and resulting plants and plant material have been destroyed.

The virus has had a huge impact on tomato growing in countries where it is present. It is easily transmitted on people, plants and equipment and is very difficult to get rid of. It also affects capsicum.

ToBRFV is a virus that we have been talking to MPI about for the past 12 months. TomatoesNZ pointed out the need to strengthen seed import requirements and new certification and testing measures were put in place early last year to try an minimise the risk of it arriving here.

In early December, industry alerted Biosecurity New Zealand to the presence of ToBRFV in seeds imported from Israel. Although these seeds were imported with a phytosanitary certificate declaring them to be free of ToBRFV based on testing completed offshore, further testing identified a very low level of infection.

This virus is something that we don’t want our growers here to have to face. The industry needs to acknowledge the quick reporting of the seed company, and cooperation of the affected parties, as well as MPI’s quick action to eliminate any risk in this case.  We worked closely with MPI during this process, as a GIA partner, along with Vegetables New Zealand (for capsicums) and Process Vegetables New Zealand (for process tomato growers) and NZ Plant Producers Incorporated (for the nurseries).

As a further precaution, Biosecurity New Zealand destroyed some tomato plants grown from different, uncontaminated seeds that were grown in close proximity to the affected plants at one of the sites.

TomatoesNZ and the GIA partners mentioned above will be contributing a “cost share” towards the biosecurity response costs, which will include any compensation claims from the affected parties. MPI pays 50% of the cost of the response, and the GIA partners split the other 50%. The total response cost is not yet known; however, it will be a lot less that what an outbreak of this virus would have cost the industry.

Tomatoes NZ’s share of the response costs will be paid from funds that are already being collected under the Fresh Tomato Biosecurity Levy.   These levy funds are already also going towards response costs for Fruit Fly (2019) and Tomato Red Spider Mite (2020).

We have had an intense couple of years of working with MPI on biosecurity responses where tomatoes are an impacted crop.  Although we would prefer not to find ourselves in a situation of having to respond to new pests; because of the GIA partnership we have been able to ensure that decisions relating to these new pests are the best ones for industry, balancing the costs of responses with the potential impact of the new pest.

Even though we are confident that the ToBRFV risk has been contained, I recommend that growers review their biosecurity practises and familiarize themselves with the signs and symptoms, and report anything suspicious immediately to the MPI hotline 0800 80 99 66.

TomatoesNZ have resources available for growers under on good biosecurity practises and on the signs and symptoms of this virus. These can be found under the “biosecurity” tab, or posted to growers on request.

There are also some excellent international resources available online:

Changes to the ETS

This year there are changes to the Emissions Trading Scheme (ETS) with the introduction of auctions, with the first auction scheduled for 17th March 2021.  Information about these changes, including the phasing down of industrial allocations are provided in February's NZ Grower magazine.

We hope you have been finding the monthly series of articles by Elly Nederhoff on glasshouse energy efficiency informative. The latest article published in February's NZ Grower magazine describes the techniques that Dutch growers have bene integrating in the past 10 years to significantly reduce energy use and improve production.  You can read the article here. We would welcome any comments or feedback you have on the articles and suggestions they present.

Exporting fresh tomates has been made more difficult this season with the decrease in the number of flights due to Covid-19, and subsequent high cost of the limited available freight space to our export destinations. We have been liaising with MPI on air freight requirements, who are coordinating with NZ Transport for support on airfreight through an International Air Freight Capacity Scheme which is in place until the end of March 2021.   An objective of this is to maintain connectivity with key trading partners for exports.

Fresh tomatoes are also exported by sea, especially to the Pacific Islands.  Sea freight has been problematic over recent months due to heavy congestion at Auckland port and strikes at Australian docks, with some vessels opting to not stop at all scheduled ports due to delays and a shortage of suitable containers for export.

While Australia normally receives over 100 tonnes of fresh NZ tomatoes in November, last year they only received two tonnes in that month.  Demand from the Pacific Islands has been lower than usual because there are no tourists in the Pacific Islands to eat the high-quality tomatoes in their hotels and restaurants; and there has also been little demand for our tomatoes from Australia.  There have been no exports to Vanuatu, Wallis & Fortuna, Taiwan, and the USA since Covid and exports to Thailand are well down.

On the other hand, exports to Japan continued well, with only a relatively small drop from 573 tonnes during Sept-Nov 2019 to 554 tonnes during the same months in 2020.

In December, Auckland based board members attended the first update on a labour saving automation project that TomatoesNZ is investing in with greenhouse engineering specialists FTEK Limited.  The team at FTEK updated on progress of a three-stage automation project.  Stage 1 began in mid-2020 with the team having evaluated key greenhouse tasks and looked at how technology can be used and adapted over time.

James Currie of FTEK says of developing something that will work for growers “The key is using technology they already know and customers they already work with.”

Stage one of the project runs through to the end of 2021, with plans to start early pilot trials in early to mid-2022. The next project update is scheduled for May and we will share information on this exciting innovation for the industry as the project develops. 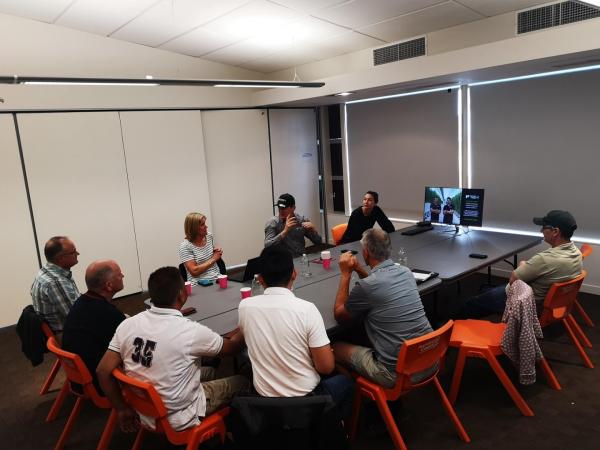 Photo caption: Auckland based TomatoesNZ board members attend an update with James Currie and Marijke Haira of FTEK