Covered crops are thriving under the economic radar

While larger industries grab most of the headlines (with good reason) they do not portray the full New Zealand story of a developed economy in action. The NZIER in a report to Tomatoes NZ and Vegetables NZ set out to illustrate their impact on the New Zealand economy of covered crops by providing estimates of the economic impact of covered crops. The report examined tomatoes, capsicums, cucumbers, eggplant, herbs/microgreens/sprouts/other, and lettuce.

Why is this important to understand?

Those concerned with New Zealand’s economic, social and environmental progress are interested in all forms of durable economic activity whether products are consumed domestically or exported. Further, we are interested in industries that are thriving and sneaking under the economic radar. Why?

Those smaller businesses wishing to remain in the industry are actively diversifying into niche markets and developing products that other bigger entities cannot replicate on a consistent basis. The days of growing small amounts of a bog-standard product that others can easily replicate on a bigger scale are long gone.

With consumer growth, opportunities have also arisen for niche players (sometimes with further processed products) who in some instances have developed their own path to market. This type of marketing strategy is based on cultivating strong relationships between buyer and seller. 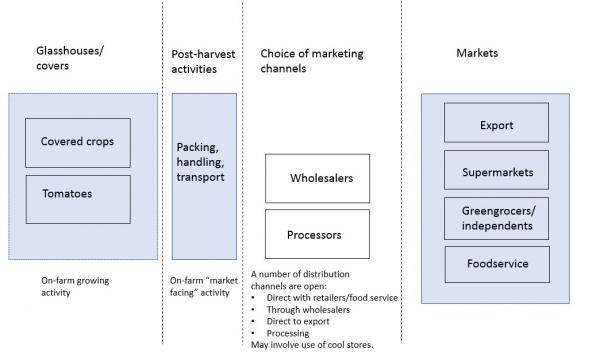 The first thing that strikes you about covered crops is the vibrancy of the industry. Fuelled by population growth, increased consumption per head, and increased tourist numbers the industry is in a buoyant state. Volume growth for most crops has been between 2% and 6% per annum over the past five years. For some growers, plans for expansion are underway.

The following sets out a snapshot of covered crops industry performance:

This is an important industry for New Zealand, attracting stable jobs and skills in a growing market for covered crop products. It makes important contributions to GDP and general wellbeing through the employment it provides, exports it makes, and an increased use of technology.

How the economic benefit ripples through the economy

We have used an approach that demonstrates how the industry interacts with the rest of the economy. The real strength of this approach is that it gives a realistic view of the economic activity that the covered crops industry contributes to New Zealand.

The impact of the covered crops sector can be measured by changes in, for example, the production and its value. These changes have effects that are felt all along the supply chain and ‘ripple’ outwards to affect the rest of the economy.

The connections between the covered crops sector and ‘factor markets’ (land, labour, capital, energy) also need to be considered. For example, covered crops compete with other sectors to draw in labour from households, and deliver wages that will be spent by households on a range of goods and services.[2]

If the covered crops sector expands, it is likely to use more labour, capital, and land, which results in less being available for other economic activity. Although, for covered crops, location and capital are possibly more important factors than competition for other land types.

All of these supply chain, factor market and ripple effects need to be taken into account when determining the economic impact of the sector.

The development of basic industry facts

The following Table sets out the impact of the covered crops industry on the economy. The economy benefits from covered crops by $120 million once you strip out the yearly running costs. The estimates are set out in total and between tomatoes and other covered crops.

Exports are relatively small with the main focus being on the growing domestic market. In value terms, the total farmgate returns are approximately $295 million, this includes $35/$40 million of exports depending the year. Exports vary depending on the supply and demand conditions in New Zealand and overseas. Strong domestic sales have made it hard to predict likely export volumes.

The number of businesses in the industry are increasing reflecting a growing industry. The industry creates approximately 2,400 jobs and produces income of approximately $53.3 million. This includes growers engaged in handling, packing and transport to wharf or market.

Covered crops is a capital-intensive business. A one-hectare glasshouse can cost as much as $2 million dollars, while plastic covering costs vary depending on the technology used e.g. the number of layers of plastic used. These covers, depending on the length, can be as much as $10,000 each. In a growing market further expansion comes at a substantial cost. We estimate that total investment per annum is approximately $16.3 million per annum for the whole industry or 0.06% of total investment in New Zealand.

For every extra $1 in income generated by the covered crops industry, at least a further $1.50 is generated for otherbusinesses. For example, the industry:

We estimate the indirect flows at $175 million (intermediate consumption). This injects the following spending into the New Zealand economy:

Transport is also a significant part of the indirect flows. The covered crops industry is highly dependent on New Zealand’s transport infrastructure.

We also wanted to understand the impact of an extra 10% in demand for covered crops. We found that demand would increase New Zealand household income by $17.3 million and national GDP by $18.4 million.

The covered crops sector is a small but significant part of the diversified New Zealand economy. Not only does it employ substantial numbers of employees; the workforce is stable. The industry provides ongoing work for other businesses and is an integral part of community.

Without the covered crops industry New Zealand would have significantly reduced employment, less variety of fresh vegetables and a greater reliance on overseas markets.

If past performance is any indication, the growth in the covered crops sector is likely to continue to be driven by further domestic per capita consumption, increased population growth and increased tourism.

[2]        Key to establishing the covered crops sector’s economic impact is ensuring that we have verifiable production and value figures and an understanding of the inter-linkages between other activities (packing, grading, etc.) and the rest of the economy (energy, fertiliser suppliers, transport providers, business services, etc.).